What will concerts be like post-pandemic? Planned Palm Desert arena offers a glimpse 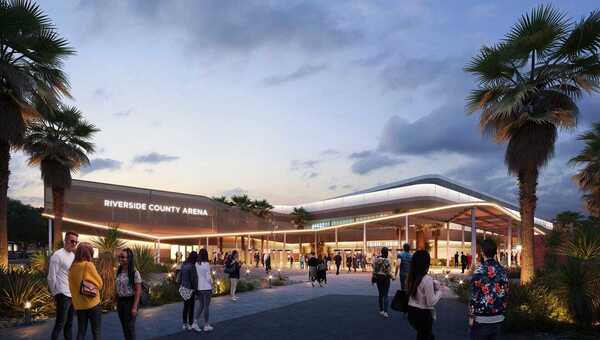 Imagine this: It's a Friday night in 2022. Your favorite band is playing at a new arena in Southern California, and you're ready to enjoy live entertainment again.

Even if the COVID-19 pandemic has passed, you can expect the event to be different.

When you visit the concession stand for a hot dog, products will be grab-and-go, and the purchase won't require human interaction.

Sanitization and cleaning will be more thorough. The air circulation system will be equipped with new technology for ventilation.

These are just a few examples of the new design elements that Los Angeles-based Oak View Group is looking to implement in its venues — not just in Southern California but also in Seattle, Austin and New York. The coronavirus pandemic is leading to changes at many sports stadiums and live event arenas as they try to safely serve fans.

OVG's planned 10,000-seat arena, which will be built just outside the city of Palm Desert, offers a window into what the post-pandemic concert experience could be like.

"We need to understand there will always be the spread out there, even if it's on a much smaller scale, and there may be other viruses that we have to deal with as we become a global society," OVG CEO Tim Leiweke said. "We're ready for it."

Live Nation, a Beverly Hills events promoter, is partnering to provide entertainment for OVG's Southern California arena. When asked about the type of acts that will perform, a spokesperson pointed to Cher, KISS, Ariana Grande, Jennifer Lopez, and Queen + Adam Lambert, who partnered with the company for nationwide arena tours in 2019.

Those tours drew an estimated 10,000 to 14,000 people. Experts are already speculating about the types of changes fans might see in concert arenas of that size.

Leiweke told Music Row in June that an Oak View Group task force is reviewing more than 180 products, solutions and technologies for seating, concourses, restrooms, concession stands and locker rooms not only for its own live entertainment facilities but others across the industry as well. Its Southern California arena also will be home to the Seattle Kraken's American Hockey League team.

'We're figuring out how we ultimately make our buildings safer," Lieweke told The Desert Sun. "We're spending millions of dollars more on all of our projects."

"Your biggest risk is the guy next to you sneezing and breathing in your face, (and)going to the bar and being eight inches from somebody else's face whose got a runny nose, coughing and not wearing a mask," Jackson said.

For that reason, arenas could require face masks or temperatures checks upon entry, not only for attendees but for staff. They might keep a certain number of seats open between fans. Surfaces that you are likely to touch might be made of materials such as copper, which erodes the COVID-19 virus. Air might be recycled through high-quality filters and ultraviolet light.

And technology could be used to ensure social distancing. When it's time for beer, fans might pour it themselves through an automated system like the one developed by Illinois-based company Pour My Beer.

"The day where you reach into your wallet or pocket and put a bunch of dollar bills on a counter where a guy picks them up and puts them in with everyone else's money, I think those days are ending and we'll be paying with a card," Jackson said.

Jackson believes the virus will be eradicated by 2022, but added if COVID-19 is still widespread, it won't be safe to open arenas at all.

When will concerts happen again?

It's uncertain when concerts will be able to happen across the U.S.

California Gov. Gavin Newsom said in April that live music is unlikely to return until there's a COVID-19 vaccine. And Robert Redfield, director of the U.S. Centers for Disease Control and Prevention, said this month that he doesn't expect a vaccine until the middle of 2021.

NFL teams such as the Cleveland Browns, Kansas City Chiefs, Miami Dolphins and the Dallas Cowboys have allowed some fans to attend games, but many teams are not allowing fans into the stadium until the third or fourth weeks of league play, or for the entire season.

Fans at Hard Rock Stadium in Miami are required to check-in at assigned gate entries, adhere to social distancing and park where they are assigned by an attendant. Staff are required to wear masks and have their temperature taken.

One of 16,000 fans who attended Kansas City's opening gameagainst the Houston Texans on Sept. 10 tested positive for COVID-19. Fans who sat near the attendee were alerted through the stadium's contact tracing system and are currently in quarantine.

Dr. Paula Cannon, professor of molecular microbiology & immunology at the University of Southern California, said these decisions must be made at a local level and reflect the risk of the population in those areas.

"I think the reality is, you can put a lower number of people in a stadium but if you believe they are always going to be socially distant, that's somewhat naïve," Cannon said. "But if you're in a state or a locale with a very low local transmission and can ensure that your audience wear masks, that's a huge reduction in risk."

But live entertainment may already be permanently altered for years to come.

Ralph Jaccodine, an assistant professor of music and business management at Berklee College of Music in Boston, described the touring industry's infrastructure like the "Wizard of Oz": Arenas can operate successfully thanks to smaller venues that act as cogs churning out buzz and new artists.

Bigger stadiums book music acts based on projected ticket sales, when a band was last in the market, a new album or an increased amount of publicity and radio airplay.

"If the arena is going to guarantee all this money, they want to make sure they don't take a hit, so they're smart about it," Jaccodine said. "In order to fill up the arenas, they have their eyes on the clubs, the theaters, the colleges and what's going on there. Because they need to see their arenas with new bands."

But many small independently-owned venues across the country are either currently closed or at risk of closing. The Troubadour in West Hollywood, for example — known for helping to launch the careers of Elton John and the Eagles — has been closed since March. Christine Karayan, the club’s general manager, told the Los Angeles Times that its survival amid the pandemic is a "big if."

"(Law) was talking about how important it is to have healthy clubs," Jaccodine said. "You're not going to play at the Boston Garden if you haven't had five to 10 years of working the little clubs and the little theaters."

Still, Jaccodine is hopeful that the industry can recover, similar to professional sports.

"When a band like Nine Inch Nails comes to Boston, that's 10,000 hotel rooms, restaurants, and rental cars and it just it brings so much financial help to the city," Jaccodine said. "We're living in a strange world, but managers like me, booking agents and even musicians, we're a pretty positive and optimistic group."